Last week, the News-Gazette posted a blog post about the fact that they sell end rolls and some possible uses for them. I mentioned that I use newspaper to light a charcoal grill, which was seized upon by the staffer. She's mentioning it today or tomorrow, and although I've sent her pictures, I figured I'd do a step-by-step tutorial here.

So, let's meet the tools you'll need for this:

Use the cooking spray to liberally douse the newsprint. Crumple it, and stuff into the bottom part of the chimney starter. You don't want it so soaked that you can use it for a window, but you want it pretty well sprayed. 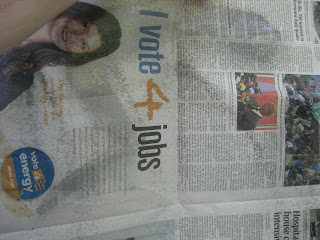 Pour in enough charcoal to fill the top part of the chimney starter. Although it's really better for your grill to light the coals on the ground, I have two kids and one of them doesn't know enough to be able to keep away. I've got a preference for lump charcoal when I can find it, but had briquettes on hand this weekend, so that's what you see. 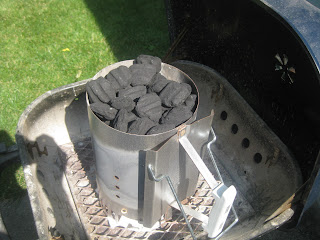 Use your lighter, matches, or whatnot to light the newspaper in three or four places around the bottom of the chimney starter. Do you see those slit-like holes? (If you don't see them well above, there's a better view in the next picture.) That's what they're for. In a couple minutes, you should have something that looks kind of like this: 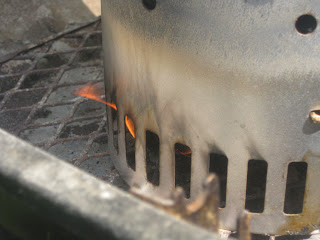 Now, you really shouldn't walk away while the coals are lighting, just in case the unexpected happens. How long it takes them to really get lit will depend a lot on how fresh they are -- charcoal is very absorbent, and if you store it for any length of time it will suck water out of the air. This makes it burn a bit smokier and slows down how quickly the coals light. The charcoal I had dates back to last fall, so it took about half an hour to reach this point: 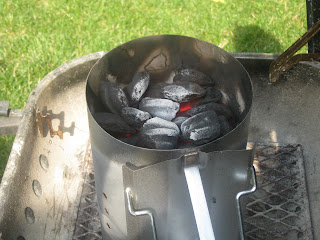 The coals aren't really lit all the way yet - you want them all to have that coating of light gray you can see on the couple in the middle. It happened to take these another 20 minutes or so before they were really ready, but fresher charcoal will light faster.

There you have it. Please note, I do not take credit for coming up with this myself - the chimney starter has been around at least since the '70s. I learned the trick of spraying the newspaper with cooking spray from Alton Brown, host of Good Eats - the single best explainer of why you (should) do things in the kitchen that ever appeared on film.
Posted by Unknown at 12:00 PM